Green Island is a coral cay located 27km offshore from Cairns, Queensland. The island was formed approximately 6,000 years ago by waves depositing sand, coral and other debris onto its coral foundations. This eventually emerged from the water, at which time vegetation began to grow as seeds were blown or carried by birds onto the island. The ancient coral cay of Green Island is a very unique indeed. Out of the 300 sand cays on the Great Barrier Reef it is the only one with a rainforest, and is now home to a diverse range of flora and fauna.

The island became a national park in 1937, a marine park in 1974 and protected part of the Great Barrier Reef World Heritage Area in 1981. The Australian government recognises that Green Island is a very special place and has protected it in several ways:

The island is a National Park and all commercial activities are regulated by permits.
The reef and underwater habitats are part of the Great Barrier Reef Marine Park.
Both Green Island and its reefs are included in the Great Barrier Reef World Heritage Area, which gives it international protection under UNESCO. 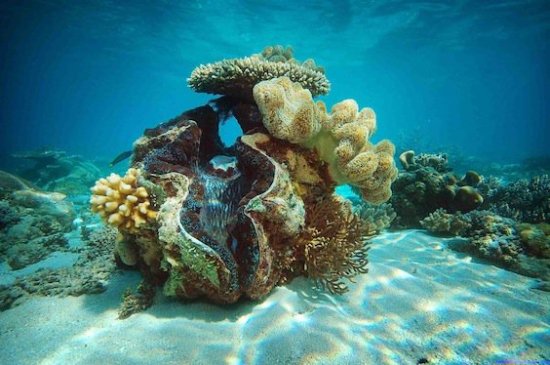 Green Island is covered in tropical vine forest which supports a diversity of birds and insects. The surrounding coral reef is home to many kinds of corals, clams, fish, stingrays and other reef life. Green and hawksbill turtles are seen offshore, and more than 60 species of bird are found on the island.

Osprey
Ospreys (sometimes known as the sea hawk, fish eagle or fish hawk) are fish-eating birds of prey that make the Great Barrier Reef their home. Typically an Ospreys diet consists of 99% fish and over time have developed sharp spicules on their feet to help grip slippery fish, unlike some other sea birds who use their beaks for catching. Their strongly muscled legs allow them to carry fish that weight up to 2kg – which is more than the bird itself weights! Ospreys will build their nests in forks of trees, rocky outcrops, on top of utility poles, buoys and occasionally ship masts. Mating pairs of osprey stay together for life. On Green Island for example there is a couple that have lived and raised many offspring over the years.

Buff Banded Rail
The Buff-banded Rail is a demure, distinctively coloured medium sized rail of the Rallidae  family. These birds are ground dwelling nesting birds the size of a small domesticated chicken. They have mainly brown upper-parts, finely banded black and white underparts, a white eyebrow, chestnut brand running from the bill round the nape, with a buff band on the breast. Usually they are quite shy but become very tame and bold when used to humans in their habitat. They are well known on Green Island for being inquisitive and stealing the odd chip off unsuspecting visitors. They forage in the ground litter, using their feet to stir up leaves in the pursuit of insects and small lizards but will also eat seeds, fallen fruit and other vegetable matter.

Other familiar marine life you will see on Green Island include:

Sea Cucumber
Over 1500 species of sea cucumbers occur world wide, and approximately 200 occur in Australian waters. The Great Barrier Reef is home to some of the most spectacular varieties in the world. The sea cucumber was one of Australia’s first exports, even before Europeans arrived. There is strong evidence that the Macassans from Sulawesi were collecting them in large numbers, and they have been a traditional delicacy in Asian markets for thousands of years. The animals were boiled and dried in the sun, which made them easier to transport, and were then used in stir fries and soups.

They also reportedly have strong medicinal powers, and have been used to treat arthritis, whooping cough and high blood pressure. They are rumored to act as an aphrodisiac, and more recent studies show that collagen produced by the animals could be used be used in anti-aging compounds for humans. These slow moving creatures have an unusual way of obtaining oxygen – they breathe through their anus! Sea cucumbers themselves filter feed the sand for decaying plant and animal material, which they sort internally and the sand is past out the anus.

Parrotfish
Of the approximately 1600 species of fish along the length of the Great Barrier Reef, the ubiquitous Parrotfish family is probably the most easily recognized. On any given visit to the reef, you are guaranteed to see these magnificently coloured creatures swimming over the coral zones. There are over 30 species of parrotfish on the Great Barrier Reef, and all share a few common traits. The most obvious of all relates to their teeth.

Parrotfish evolved from the carnivorous wrasse family, but through the course of time, their teeth have moved forward on the jawbone and reduced in size. Eventually, the teeth fused together, creating a very useful tool for scratching algae off the surface of the coral. Usually they will scratch a thin layer of limestone off the coral along with the algae, and this helps with the breakdown of the cellulose. Often parrotfish will be seen passing the broken down sand as a fine stream of sediments, and some scientists have calculated that up to 30% of the coral sand you see at the reef is in fact old parrotfish poo! As always, however, there are a few exceptions to the rules, with some of the larger species actually feeding in part on live corals.

Clownfish
The most famous species is the clown anemone fish, Amphiprion percula, which has three white bars narrowly edged in black across their bodies. They are generally shallower water dwellers, existing in the top 15-20m of the world’s oceans, and are opportunistic planktovores. The term anemone fish relates to the special relationship that this group of fish has developed with sea anemones. Sea anemones are cnidarians, which means they are related to corals and jellyfish, and the common denominator is that they all bear tentacles covered in millions of tiny stinging cells called nematocysts. Any “normal” fish likely to come in contact with the tentacles of an anemone is likely to be stung, killed and eaten. Of the more than 1000 species of anemones, only 10 act as hosts for the clown fish.

White Tip Reef Shark
The Whitetip Reef Shark (Triaeodon obesus) is one of the smaller shark species found on the Great Barrier Reef. It is easily recognizable by its slender body and short but broad head, as well as tubular skin flaps beside the nostrils, oval eyes with vertical pupils and white-tipped dorsal and caudal fins. They are a not aggressive but are extremely curious and will often approach swimmers closely. They are rarely seen during the day, which they spend resting inside caves as unlike some other shark species they do not need to constantly swim to breath. They are often sighted at night when they emerge to hunt.

Green Island is home to 126 native plant species, including a unique mixture of coastal and rainforest plants. The coastline is ringed by short, scrubby coastal vegetation that can survive drier conditions along the beach. But, step a few feet in to the centre of the island, and the vegetation changes abruptly to a dense, shady vine-thicket rainforest. Coconut trees are not thought to be native to the island, but were introduced to the island in 1889 to provide food, drink and shelter for fishermen and stranded sailors. The island supports many diverse plants in a very small area with 49 tree species, 3 species of palms, 7 types of shrub, 18 vines & creepers, 4 species of grasses and 2 types of herbs. 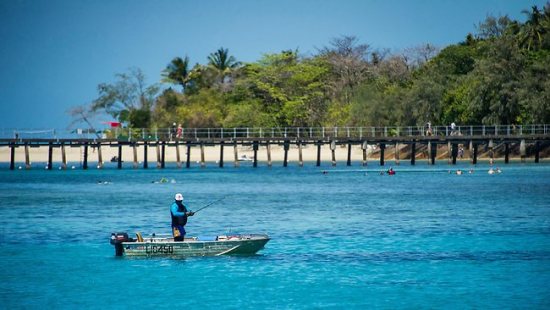 How is a coral cay is formed?

Coral cays are islands that form on top of existing platform reef – they are basically large piles of sand, coral rubble, broken shells and other reef debris. Wave action pushes the rubble debris into a pile on the calm side of a reef flat. If conditions are just right, this pile of rubble grows into a small sand island. Seabird droppings help cement the sand together so that it will not wash away with tides. They also provide nutrients for germinating seeds that wash onto the island. Over time, if conditions remain ‘just right’, the island can develop a complex ecology.

Six of the world’s seven species of marine turtle occur in Australian waters, including the: 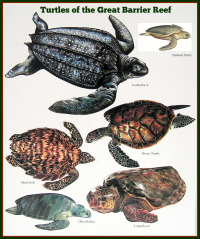 An extensive seagrass meadow surrounds most of Green Island which provides a feeding ground for green and hawksbill turtles and dugong year round. If you're interested in turtles you can visit Marineland Melanesia to view green turtles and hawksbill turtles up close. They support turtle rehabilitation, caring for sick or injured sea turtles until they can be released back onto the Great Barrier Reef. 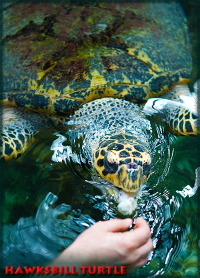 The Great Barrier Reef is home to over 1500 different species of tropical fish, from the smallest kinds of bait fish up to some of the largest varieties of sharks on the planet. The different types of animals found along the Great Barrier Reef help make it one of the richest and most complex natural systems on earth.

See what marinelife you can identify at Green Island: 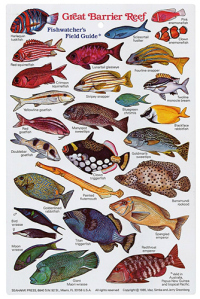 Length:
Approximately 2300 km (1300 miles). It begins near Papua New Guinea in the north, and continues south along the Queensland coast to Bundaberg (just north of Brisbane). 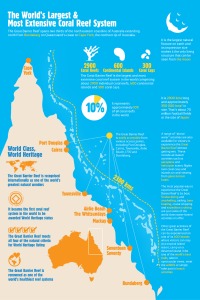